One of the assumptions of my doctoral research was the idea that the historical avant-garde of the 20th century may be interpreted as a main intellectual precondition of hacktivism. I attempt to demonstrate that the existing theoretical framework available to analyse the traditions of avant-garde art can provide valuable new aspects to understand hacktivism, as well as to highlight the analogies between the historical avant-garde’s revolutionary ethics and those of hacktivism.

Hacking can mostly be explored as a loose network of subcultures with a diverse history and a dispersed contemporary geography. As part of the history of digital culture, the history of hacker culture unfolds determined by the closely interwoven technical, societal and economic conditions that have given rise to it. The word hacker, when first mentioned in computer history, was used to describe those innovators who contributed to the development of computer technology on the periphery of the military-industrial complex. These innovation communities, like MIT’s Artificial Intelligence Laboratory, defined the groundwork and directions for the future development of both software and hardware.

Steven LEVY, historian of early hacker culture and cyber-journalist defines a list of values as the original hacker ethic based on the AI Lab at MIT. The six values are direct access, freedom of information, decentralisation, meritocracy, the value of computer engineering ingenuity, and a general optimism towards computers. When put into practice, the hacker ethic commits to acts that question authority, not by dialogue, but by overcoming the technical conditions of that given authority. Academics of hacker culture put great emphasis on exploring the motivations of hacking, of which the most common ones are joy, a feeling of success, the excitement of border-crossing and discovery, the desire for knowledge, curiosity, and the experience of power and control. Hacker culture synthesises controversies like individualism and community, humility and arrogance, liberalism and elitism, and is saturated by the tension between virtual play and experiment versus an outside world limited by laws of physics and state.

After the release of the first low-cost microchip, the new enterprises unfolding from the hardware hackers’ DIY gadget clubs tried to endorse the original hacker ethic in their modus operandi, while trying to capitalize on their knowledge and skills gained in hobbyist culture. The Free/Liberal Open Source Software movement unfolded in opposition to this progression. The innovative open models that thrived in early hacker culture later became an inherent part of the network culture paradigm. As Pekka Himanen describes, the hacker ethic expanded into the basic modus operandi of the information society, characterised by flexibility, openness, decentralisation, values freedom and creativity, and treats professionals as nodes in information technology systems. This expanded hacker ethic is defined by values of passion, freedom, a specific money ethic, community and openness, nethic, activity, and caring. (HIMANEN 2001: 140).

Jordan distinguishes between hacking gestures based on their level of novelty and technological complexity. He sees the continuity of the hacker ethic in hacktivism, as it intervenes into technological and societal determinations at the same time, thus changing how people interact with technology and each other (JORDAN: 2008: 96). Hacktivism is the creation of new technological determinations, where these new determinations define interaction with technology in new and unexpected ways. Furthermore, hacktivism implements the original values of the hacker ethic, and its working methods and goal are both collective and open, aiming for political change. The determinations reformed by hacktivists are not only of technological nature but of cultural, economic and communal character as well. The attitude of hacktivism is non-conform in its use of technology and its relation to culture, questioning and discerning of technical, institutional, legal or social authority.

III.1.  AVANT-GARDE AS THE FORERUNNER OF HACKER CULTURE

One of the core assumptions of my research is the idea that the historical avant-garde of the 20th century may be understood as a main intellectual precondition of hacktivism. The historical avant-garde was the first revolution in the history of art to attack, crack, and question the status and traditional genres of institutionalised art in bourgeois society (SCHULTE-SASSE Xiv in BÜRGER 1984). The existing theoretical framework available to analyse the traditions of avant-garde art may provide valuable new aspects to understand hacktivism. At first sight, the observer might notice the obvious: both hacker culture and the historical avant-garde of the arts show purposeful disrespect towards institutional, social or technological authorities. To prove that the comparison is not superficial or accidental, I evoke two texts about the avant-garde, Peter Bürger’s The Theory of the Avant-Garde as a well-known classic, and several studies from András Kappanyos from Ötletek az avantgárdról (Dancing on the cutting edge: Ideas on the Avant-Garde), of a more fragmented and innovative approach.

The demolition of borders between art and life, the rejection of alienated artistic practice, and the invention of new practices are central to Bürger’s interpretation of the Avant-Garde’s program (SCHULTE-SASSE Xxxvi In BÜRGER 1984; BÜRGER 1984: 49). Kappanyos defines the analysis framework of avant-garde strategies in the triptychon of abstraction, activism and anti-art, in regards to composition, action and invention. He maps its many -isms as combinations of these factors’ variations. (KAPPANYOS 2008: 33).

We may find and analyse numerous analogies in the way avant-garde and hacktivism operate, like their program of activism, their border violation practices, their performance and hacking instructions to be reconstructed by peers, their relations to tradition and invention, their questioning of individual authorship, and their provocative behaviour towards mainstream society. Hacking may be examined as the overcoming of the semantical determinations of a certain programming language or network regulation. We may analyse hacking as an intervention that hijacks meaning (function) of text (code). We may find yet another analogy with avant-garde art and its sceptical, deconstructive attitude towards traditions of language and forms of literature as parts of institutionalised status quo.

Both avant-gardists and hacktivists build their legitimation on a double basis: tradition and novelty. Avant-garde artist provokes the canon and end up being canonised for the very same innovation. This is what Kappanyos calls the Paradox of success. (KAPPANYOS 2008: 12-13). Hacktivists intervene in novel ways into an already existing system of a network, computer or communication technology. Therefore, both canon and novelty are preconditions of hacking. Both the avant-garde and hacktivism depend on a status-quo to refer back to, to provoke, to expand or to question.

Both avant-garde and hacker culture refuse existing structures of the past in favour of an idealized future utopia. These tendencies show especially well in their common affinity for issuing manifestos. Just as the artists of the avant-garde, hackers also feel personally addressed to destruct borders and barriers that stand in the way of realizing their own autonomous ethic. (KAPPANYOS 2008:102, 104, 146)

The way historical avant-garde did not destruct the institution of art as a whole, nor did it erase traditional genres of art, but carried out interventions that changed the tradition of art itself, is comparable to how hacker culture and hacktivism contributes to the information society. In order to examine how they resemble in operation and process, we may analyse hacktivist interventions along the process-oriented typology of the avant-garde artwork described by KAPPANYOS. We may as well dissect avant-garde processes by JORDAN’s novelty- complexity- and process-oriented hacking-typology.

A 0-day, the exploit of a so far undiscovered vulnerability of a system represents the highest value of novelty and innovation in hacker subcultures. Let’s examine Duchamp’s La Fontaine as a 0-day, getting through a hole of the canon’s information network. In this case, the vulnerability is the novelty-hungriness of the bourgeois that instantly includes the piece in the canon for the idea of wanting to stay out of it. Any further ready-made may be considered a 0+1 day in this regard, whereas the vulnerability is still present, and the results achieved with the same exploit, although less outstanding, are very similar.

We may find numerous examples of social engineering as the abuse of common social conventions in DADA performances. Let’s take, for instance, another well-known example, the grand soirée organised in 1919, in Zürich’s Saal zur Kaufleuten. The event, as described by Matthew S. Witkovski, was planned and executed in order to provoke the audience against the performers. It definitely succeeded in doing so, getting the spectators involved in the event by throwing trash, money and cigarettes towards the performing dadaists, preventing them from finishing their reading sessions, including Serner’s Letzte Lockerung (last demolition). The screenplay anticipated the audience’s reaction. 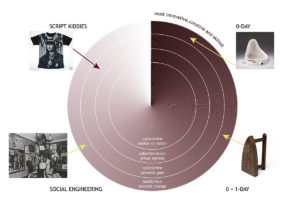 Kappanyos analyses the destruction of the author’s traditional relation to their own work of art as part of the avant-garde’s anti-art component. In his interpretation, aleatoric gestures do away with the artist’s implicit intention, ready-made excludes craft, and performance puts an end to artwork being a product solid in space and time (KAPPANYOS 2008: 32 ). He regards innovative processes to be at the core of the avant-garde work of art, instead of artworks themselves. He separates ephemerous, combinatorial, aleatoric, performative, self-referential and recontextualising processes. (KAPPANYOS 2008: 63-69). We may shortly examine how this structure fits hacker culture: 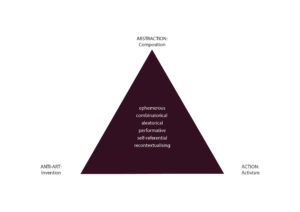 I dedicated my doctoral dissertation to the endeavour of defining hacker culture and hacktivism through its diverse history and contemporary geography. I tried to highlight the analogies between historical avant-garde’s revolutionary ethics and those of hacktivism. Studying hacker culture reveals an impalpably wide techno-cultural horizon, where countless projects and groups operate day to day, and where technological innovation is way faster than academic research or legal justice. Nonconform information technologies are probably the most inspiring layer of contemporary culture to study, that have way more effect on shaping this culture than what one would think at first sight. The immediacy, innovation, subversion and operation methodology that is present in these phenomena is something that might rejuvenate contemporary artistic practices and their interpretation.

BÜRGER, Peter: The Theory of the Avant-Garde, Translation from the German by Michael Shaw, Foreword by Jochen Schulte-Sasse, Theory and History of Literature, Volume 4, Manchester University Press, University of Minnesota Press, Minneapolis, 1984